The Opel Ampera plug-in hybrid is coming. There is no good reason to buy it, even if you are a devoted Green. Buy a traditional car - and one for your neighbor too. Or insulate someone's house.

“What would Jesus drive?” is a serious question in some part of the US. In a similar vein, we could ask what car a devoted Green should drive in Europe? To simplify the problem, let's just think about CO2 emission of cars for the moment – our Green is concerned about global warming, and not about (mostly) local pollution. A car's CO2 emission is proportional to its fuel consumption, but it also depends on the type of fuel it is burning. The same volume of diesel fuel is emitting about 15% more CO2 for example compared to gasoline.

We assume that we are talking about a rational green, so first generation biofuels would not be considered as they very likely are not reducing CO2 emissions at all, when everything is taken into account, are very expensive, require mono-cultural agriculture and push up food prices. We are talking about Europe, Brazilian cane sugar maybe an exception, but its import is restricted by high tariffs.

One way to reduce fuel consumption is to drive smaller cars – in fact, not driving at all is the best way of reducing fuel consumption. But at the beginning we assumed that our Green does want to drive - we are not talking about a fundamentalist. So let's assume that we want something of a mid-sized car, with power of roughly 100 kW (130 horse power). OK, indeed we like to be a bit on the strong side of average.

The following chart shows some car makes (mostly 2012 models) with their official CO2 emissions and power. We know that in real life we probably get about 30% higher fuel consumption, but if the distortion is roughly the same across cars, then we can still compare emission numbers. 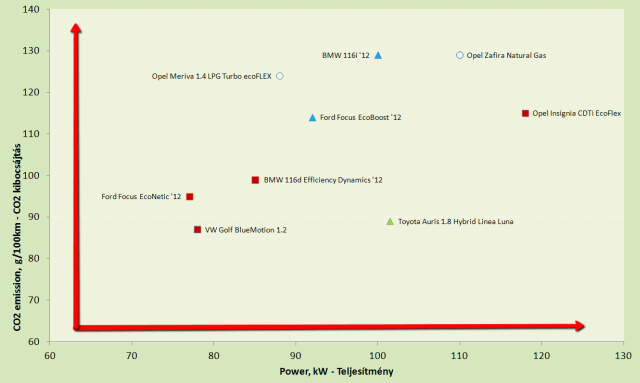 It seems that Natural Gas and LPG cars are not really competitive in terms of CO2 emissions. They are better than similar gasoline cars, but because of the bulky gas tanks, you would need a bigger car, and compared to diesels, they are not that efficient. You could consider the potentially cheaper fuel and lower emission of other pollutions (Nox, particulates), but if we focus on CO2 we can largely forget LPG and natural gas for the moment.

What is interest also that how close non-hybrids (especially diesel cars) have come to hybrids in terms of fuel consumption and therefore CO2 emission. We are talking about European reported mixed-cycle (city+highway) fuel consumption of around 3.5 liters for mid-sized diesel cars (Ford Focus EcoNetic for example), and even the new Opel Insignia CDTi Ecofelex, a large car, only consumes 4.3 liters of diesel per 100 kilometers. Compare this to the 3.9 liters gasoline for the Toyota Auris Hybrid, the slightly more affordable cousin of the Prius. Fuel consumption of traditional cars kept on declining in recent years significantly as new tweaks like start-stop have been introduced. In terms of CO2 emissions, latest diesel cars are serious competitor of Hybrids – it will be the price of fuel and the price of technology that is likely to be decisive, even for devoted Greens.

The next possibility is electric cars. Pure electrics like the Nissan Leaf are not comparable to the cars above, as they have very limited range of around 100-150 kilometers, (comparable to the range in a traditional car after the warning light of low fuel comes on). This can change in the future, but for the time being only plug-ins are a real option. These are cars that have a limited pure electric range of 20-40 kms, after which they switch to gasoline or diesel. The Opel Ampera (Volt in the US) is just becoming available in Europe, and soon Toyota and others will come out with plug-in models like that – this is our favourite: 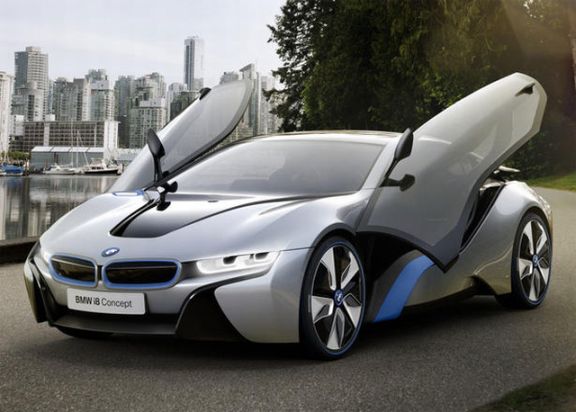 So at the moment our Green probably should choose between some of the diesel cars above and the Opel Ampera. In the case of the Ampera, CO2 emission depends on what kind of electricity we use (how much CO2 was emitted during its production), and how much we drive it in a pure electric range (in a gasoline-mode, it is not especially fuel-efficient, at about 5l/100km). Let’s be generous, and assume that electricity is produced carbon-free, and that only about 1/4 of the Ampera usage is in gasoline mode. Then we get something like its official CO2 rating of 27g/km. So far so good! The choice is obvious, if you really want to be green.

But we are mean economists and we cannot resist looking at the price tag. The Ampera costs about twice as much as a similar sized car (and it is only a 4-seater). We have a wild idea: buy a low consumption normal car. Then buy one for your neighbor, if he agrees to scrap his high consumption one. Your net CO2 impact would be the same as buying the Ampera. And your neighbor would be happier too... 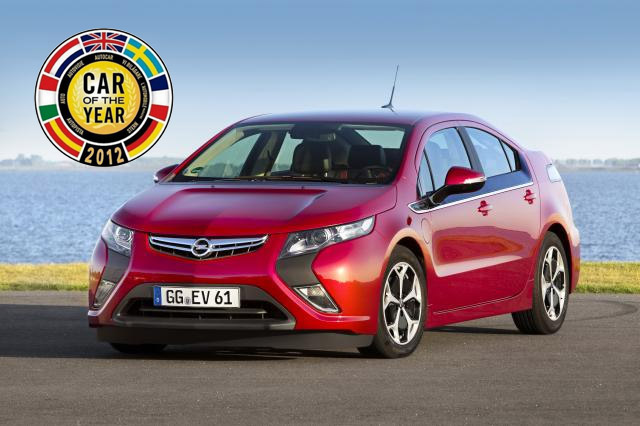 Approaching this another way, calculate how much emission a normal car will have in its lifetime. Let’s say it will run 400 thousand kilometers, and will emit 130 g CO2/km. That is a grand total of 52 tons of CO2, over decades (here we disregarded the roughly 10 tons of CO2 that comes from the production of the car). The current price of CO2 is well below EUR 10/ton in the EU’s emission trading scheme. Buy EUR 500 worth of emission permits, and destroy them - you are done, for the next 20 years. Still not satisfied? Maybe not believing in the whole EU carbon trading system? Do your own carbon offsets. Insulate your home, so that you save CO2 emissions when heating. There are plenty of projects that reduce carbon and costs way less than EUR 100/ton, or even potentially save money for you. When you are paying that extra 20 thousand Euros for that Ampera, you are offsetting carbon at the cost of about EUR300/ton. You can do a least 3 times as much, and potentially even your neighbor will be happier too.

What if you want impress with being Green – not just quietly reduce CO2? Our advice is still not to buy the Opel Ampera. Wait for that BMW i8 – that would impress!