If Real-Barca matches are called ’El Clasico’, then certainly tonight’s Euro Champs quarterfinal between Germany and Greece, at the two extremes of the current Euro-crisis, certainly deserves the name ’El politico’.

Merkel will be there. They moved forward a meeting with Italian, Spanish and French leaders so that she could make it. 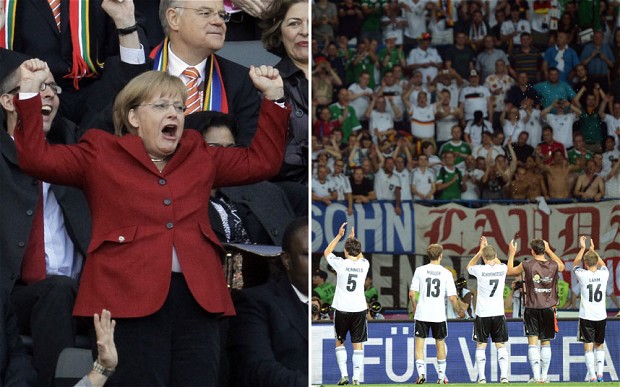 The German government spokesman said "This is a football match, and it is exclusively about sport".

Meanwhile the Greek coach (who is by the way Portuguese) said "As far as the players are concerned, they can have extra motivation and more passion in this game against Germany” because of the economic crisis.

Everyone’s in for a few kicks, while the referee’s not watching. The German odds are clearly better, but I guess many Southern Europeans support the Greeks, and not just because they could eliminate an important rival team…

If a match took just a bit longer (and if Greeks somehow made into the final), it would be an optimal time to reintroduce the drachma, because everyone would be too busy watching.