The tender for one or two new nuclear blocks at the Paks site will be announced by early next year at the latest – at least according to the most recent news. This is a bit like calling a design competition for the Hungarian euro coins. But it costs much, much more. There are several reasons against a rushed nuke expansion: nuclear energy is expensive, and it seems that not only money, but electricity demand and project management skills are also lacking in Hungary. The exact terms of the tender remain unclear, as is the issue of who would apply given these conditions.

One (1 GW) block could cost 1,000-1,500 billion HUF, equivalent to between 3.5-5% of Hungary’s GDP, an amount that would of course increase the public debt. This investment is so large (and the comparable construction of nuclear power stations in Europe is so rare nowadays), that its cost could fall anywhere in this 500 billion HUF range. Without proper project management, expenses could even exceed 1,500 billion HUF. (Nevertheless, it is particularly surprising that the most recent reports on the tender announcement refer to 2,000 billion HUF per block – this could, of course, be a typo.)

All this isn’t really news. In fact, it is yet another issue on which we agree with “green” organizations. See, for example, last year’s interview with András Perger, expert at Energiaklub Climate Policy Institute – mandatory reading for anyone interested in the topic.

According to our calculations, the electricity generated by the new block would not be cheap in Hungary. The price of produced electricity could amount to at least EUR 70-80 / MWh, whereas the current market price is EUR 50 /MWh. The technology is very capital intensive: since most costs arise already during the construction phase, the electricity generated by it is very sensitive to capital costs (see graph below). Calculating with investment expenses of HUF 1,500 billion / block, the price of nuclear electricity could easily surpass EUR 100 / MWh (and may even reach EUR 120 / MWh in the case of HUF 2,000 billion investment cost). The cost of capital is rather high in Hungary at the moment, resulting in particularly high nuclear electricity prices.

The price of nuclear energy as a function of financing costs 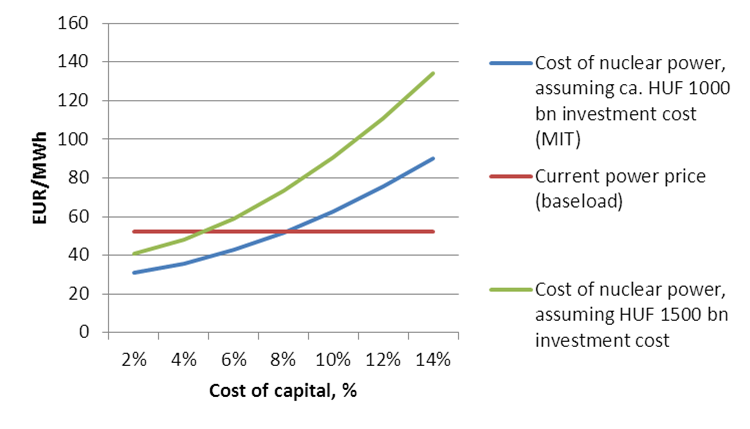 Source: MOL calculations based on MIT Du and Parsons (CEPR, 2009).

The MIT scenario assumes no excess spending, investment costs of EUR 3,400 / KW and a 5-year period for project realization.

Furthermore, it is precisely because of these huge upfront costs that any delays in the project could lead to huge excess expenditure. A one-year delay could increase expenses by 10%. (The reason for this is that we must pay the yields of the already invested thousands of billions for a further year, whereas the revenues stemming from production will only be incurred later.)

The construction of nuclear power stations is characterized by excess costs and delays all over the world. In Finland, where the construction of the Olkiluoto power station’s third block commenced in 2005, the initial deadline was 2009, but this has since been extended to 2014. They have spent well over twice as much as the originally planned EUR 2.5 billion. And project management skills in Finland are probably better than those in Hungary – although this could, of course, change in a positive direction.

Because of the expected technological developments in renewable energy production (i.e. with regards to PV solar panels), it seems unwise to spend the money earmarked for meeting electricity demand 40 years in advance, thus fixing high prices. (You can read our post on the technological development of PV solar panels here). The country’s newly adopted energy strategy also forecasts a potential two-thirds decrease in solar panel investment costs between 2010 and 2030. By then, electricity generated by solar power will probably be cheaper than the nuclear-produced electricity provided by an expanded Paks power station – moreover, the full amount would not have to be spent in advance. Nuclear technology could also evolve further, and in the future it may be possible to build other types of nuclear power stations with greater control and smaller risks.

Electricity demand in Hungary today is 3-4% lower than its pre-crisis level. So long as potential GDP growth is at most 0.5% annually, no dramatic spike in electricity demand can be expected. If old, inefficient electric equipment are replaced, the new ones will be more environmentally friendly, which in turn further decreases demand…

The flexibility of the currently planned block is minimal: it would produce electricity even at night. Neither now, nor presumably in the near future, will there be demand for this in Hungary. In addition, electricity generated at night can only be sold at depressed prices abroad. The issue of electricity storage is also unresolved – further technological developments are expected, but it may be unwise to start construction in the hope that the problem will certainly be worked out by completion. Furthermore, the geographic conditions in Hungary are not conducive to building pump-storage units: Hungary has no mountains.

Overall, we believe that the necessary financing is unavailable, the technology is very expensive, and sufficient demand is lacking. We look forward to the tender process with interest.