From Before Cyprus to After Dijsselbloem? The Eurogroup leader whose name starts with a D showed how to become a swearword from obscurity in a single day. But was he actually onto something important? A modest proposal.

OK boys and girls, it is time to ask some tough questions. What should the financial system really look like? Now after Cyprus, nothing seems certain. Are all (or just small?) bank depositors guaranteed? By whom? And what is that worth? Should we really go the way of Islamic finance? Is capitalism doomed? Is the free international movement of capital politically possible? Is it a good thing at all? 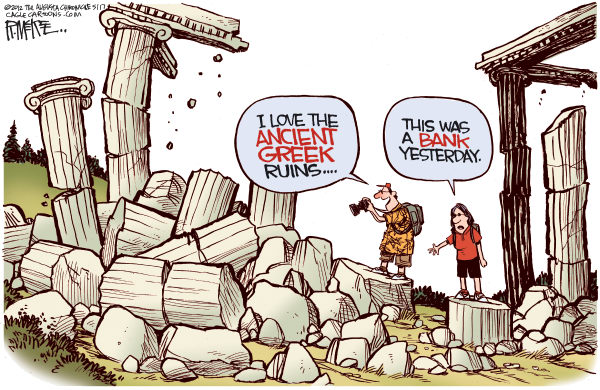 I came up with an answer something like this: ideally, you should have two kinds of investment vehicles:

Forget about banks. The government would “guarantee” (or could even run) the/a T-bill fund, to the same extent that it “guarantees” government debt. Not a perfect guarantee, but let's face it – no such thing as a “risk free asset”. The rest would be equity financing, in all but (maybe) name. There could be various risk sharing arrangements, but no one would have the illusion (that some still have today) that it is worth talking about “fixed” income. No one would guarantee your risky investment, because if someone (a government) does so, eventually it grows so big that the guarantee becomes worthless. And other times it is just distorting incentives. There could be legislation aimed at educating the public about the lack of state guarantees (or explicitly banning them) and preventing the emergence of bank-like, fractional reserve entities. 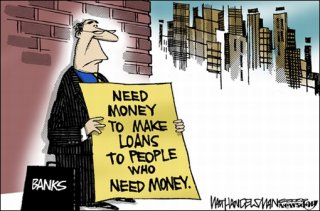 But as usual, someone else has thought about this solution more or less already, as far back as the Great Depression in the 30s, as I found out recently. It is called the Chicago Plan, suggested by a bunch of University of Chicago economists at the time, with proponents like Henry Simons and later Irving Fisher. Milton Friedman was also a fan of a slightly different version.  Here is a recent IMF paper that looks at the evidence, and concludes that this is still a good idea.

If you are too lazy to read the paper (a mistake, it really is worth reading), here is a short summary of what it is and what the advantages are:

The basic idea is that the bank sector could not create new money, as it can now, but would have to have 100% backing of sight deposits in government issued money (I think it would be a good idea to have separate institutions for sight deposits and the rest, so that the average investor does not confuse them…).

Private intermediaries would be in the business of intermediating savings to investors – the only difference is that the financial sector would have to collect those savings first. There can be variations on this plan: in the main proposal discussed in the IMF paper, the government would be trusted to be the only one controlling money supply. That might not be such a good idea, and an independent central bank would still be better, but that is a relatively minor detail. The important point is that the payment system and the financing system could be separated, so that life would not stop if “banks” close, as it happens today.

This sounds almost too good to be true – why have not we adopted it yet? The simple answer is politics – the banking sector does not like their privileges (to create money and be bailed out) to be taken away. Pretty much the same thing prevented the plan from being introduced back in the 30’s. Add to this the usual inertia: when things seem to work fine (and remember, most people enjoy the bubble phase of a credit cycle), no one is interested in a wholesale redesign. It is no coincidence that the original plan came to prominence during the Great Depression. But maybe the current or likely future crises could prompt a re-think.

Large banks - and all depositors - so far (before Cyprus) enjoyed a state guarantee, as long as states (or friendly neighbor states) were solvent. And banks could pay out gains in good times to employees and shareholders. The transition to a new financial system would be especially tricky in the EU – would EU members (I mean, Germany) really guarantee each other's government liabilities? Lots of political questions would arise, but these will need to be sorted out at some point anyway, currently they are swept under the carpet.

Despite the difficulties, the transition would be worth it. This would be the real market solution, instead of the current systems of winks and implied guarantees of dubious worth. Alas, market solutions are not trusted these days, because the conventional wisdom is that markets got us into trouble in the first place. We are more likely to end up with an over-regulated, depressed financial system (as between the 30’s and the 80’s), with restrictions on international capital flows, rather than a really free market one. But maybe it is time to sow the intellectual seed. He may not have meant it this way, but the Dutch Finance Minister may have been onto something when he said that the Cyprus case is a template for a new approach…