The world is either going to be constrained by the high price of energy, cook itself or it will use a lot of gas, barring a revolution in renewables.

In our earlier post we showed some enduring energy trends. In this one we take a look at what happens if these trends broadly continue. This is always a tricky exercise – trends have a tendency not to continue after a while. But energy is a slow-moving system, and maybe the factors that led to the trends so far are slow to disappear. In any case, treat this more as a fun exercise rather than a forecast, but some interesting relations can be discovered even then. 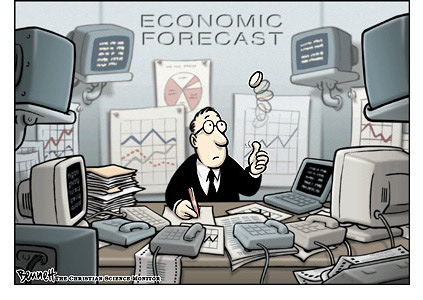 First, let’s have a look at what happens to overall energy intensity. We showed that this - energy use per a given amount of GDP - has been on a consistently downward trend in the past 30 years. This has been happening roughly since when energy became relatively expensive and energy imports a concern for politicians, and as GDP growth has become increasingly services-driven. We do not see convincing reasons why these factors would grossly change in the next 20 years, so we assume the same trend as in the past 20. This means that the world as a whole would reach roughly the same energy intensity as Hungary has now (and a bit lower than the OECD average currently). That seems about right – in 20 years the per capita GDP of the world, barring disasters, should be close to current day Hungary’s.

For overall energy consumption, this would mean a roughly 40% increase, which is actually broadly in line with consensus.

How would the energy mix develop? This would of course depend on many factors like technology, government policies, resource scarcity or abundance, and the resulting relative prices. But let’s make some bold assumptions here, starting with oil use. If global per capita GDP in 20 years is going to be like in Hungary now, then we could do worse than assuming the same oil intensity to GDP as in Hungary. As it happens, this would imply a 2.5% annual decline in the oil use/GDP ratio, not that far from the trend in the past 20 years (-2.1%) and very close to the trend in the past 10 years (-2.4%), when oil has been more expensive. This would still imply an increase of global oil consumption, but only by about 10%. This is lower than the usual industry assumptions, but these assumptions are usually based on an earlier trend (we wrote about this in greater detail here).

For the rest of the energy consumption, let’s start with hydro and nuclear, and let’s assume that they grow in line with global GDP, by about 80-90%. This is actually a (far) faster growth rate for both of these than in the past 20 years, and is probably an overestimation, but let’s be generous and assume that China’s and other’s nuclear power ambitions will be realized, and that hydro power will increase due to it being a renewable with flexible output.

Non-hydro renewables are difficult to call, as they will switch from being mainly based on subsidies to mainly being a viable business proposition on their own by roughly the second half of this 20-year period. Let’s be generous again, and assume that the use of non-hydro renewables (mainly solar, wind and biomass) will increase to the same level compared to GDP where it is in the EU (this is the most intensive region) right now. This would imply an almost 4-fold increase globally. 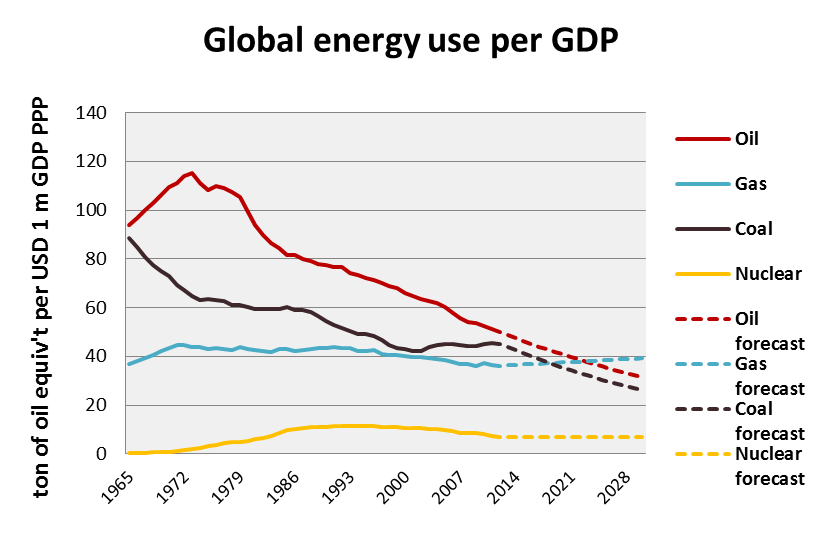 After this, the remaining energy requirement needs to be shared between coal and gas. Here it is actually unlikely that recent trends will continue. China is getting worried about the pollution coming from coal use, and coal use in the rest of the world has already peaked, in 2008. It is reasonable to assume that in 20 years’ time the world will use roughly the same amount of coal as it does today – in other words we are probably close to peak coal use (link). This is more optimistic (or pessimistic, if you are a coalminer) projection than for example that of the IEA – they call for a roughly 12% coal consumption increase over the same period. Coal plants will become more efficient, and more importantly, a richer world will care more about both local and global pollution, and coal is the most polluting energy form on both counts. Only if the fears of import dependency or price advantages override these considerations may global coal use increase – it is usually available domestically and it is cheap. 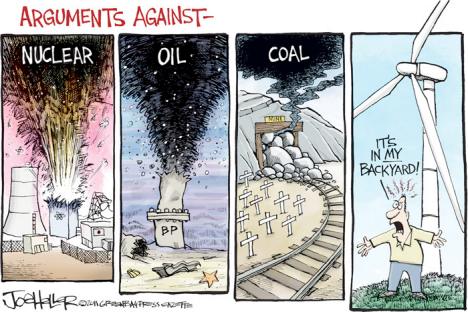 Natural gas use pops out from our back-of-the-envelope calculations as a residual. And if our assumptions previously were correct, global natural gas production would need to double over the next 20 years. That is a lot faster than during the past 20 years, when the increase was only 64%. It is also higher than the roughly 50% increase the International Energy Agency forecasts. Gas would overtake first coal then in about 10 years oil as well in the energy mix. 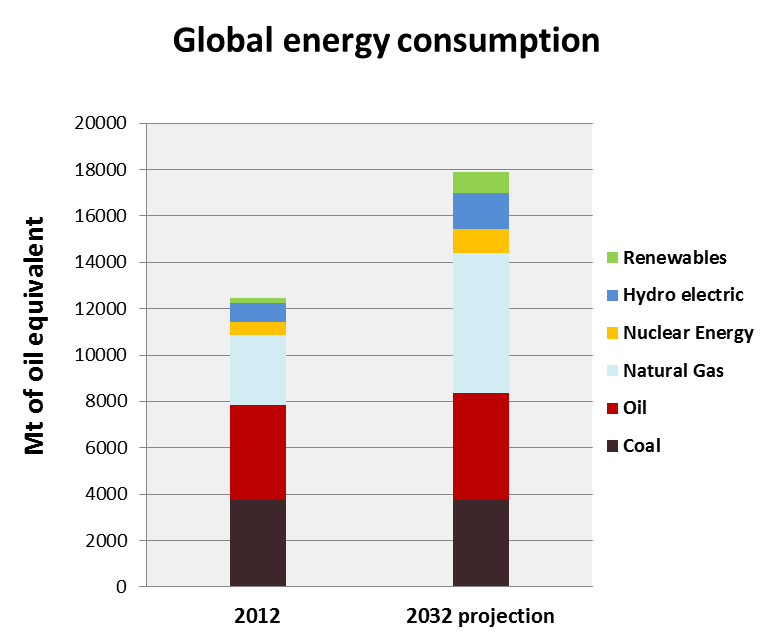 So it is possible that our previous assumptions were wrong somewhere after all. But remember, we were generous regarding hydro and nuclear growth, and oil is already too expensive to play an increasing role outside of transport. So one solution would be a radically higher use of non-hydro renewables, even beyond the 4-fold increase we assumed (the IEA forecasts similar numbers). Non-hydro renewables would need to increase more than 10-fold to keep gas consumption increase at 50%. That would be a tall order, a 12% compound annual increase over 20 years. Given that most energy production in this category still needs government subsidies, and that a lot of capital intensive investment would need to happen in developing countries, that seems unlikely – but possible, given an early cost break-through.

It seems that the world is either going to be constrained by the high price of energy, cook itself or it will use a lot of gas, barring a revolution in renewables (or in other technologies that are not even on the radar screen right now). A higher global use of gas, fortunately, seems entirely possible, given its abundance.

We used our own economic projections for the next 20 years, which show a GDP increase of 85% over this time period, (as opposed to the 97% increase during the 20 years to 2012).  This implies a compound annual global GDP growth rate of 3.1%, probably slightly below what most institutions project for long run sustainable global growth rate. We use UN population estimates, which show a 20% increase in the global population over the next 20 years. If anything like these numbers come about (i.e. we avoid a global economic disaster), it will be very difficult to limit overall energy consumption. Most of that still would come from fossil fuels, which means that it would be very difficult to avoid increasing CO2 emissions as well – in our case outlined above, CO2 emissions would go up by 25%, despite the 4-fold increase in renewables and an increasing use of gas, which emits less CO2 when burned than coal or oil.