Dont't try it at home. You will still not even get close to the official mileages.

There are plenty of loopholes and a lot of temptation to manipulate car mileage figures. Cars are tested at high altitudes, and small external indentations are taped over to achieve better fuel economy and emissions results.

If you have recently bought (or are still planning to buy) a new car, or if you simply a car-freak, browsing through fuel economy data, surely you have noticed how drastically car consumption has recently fallen thanks to fast technological development. The comparisons are indeed incredible: while a 1991 Renault Clio consumed 5.2 l / 100 km with a 1.2 motor, the 2012 Clio model consumed just 3.6 l with a 0.9 motor. Meanwhile, its power improved by more than 50%. This means that consumption per unit performance has dropped to below half. 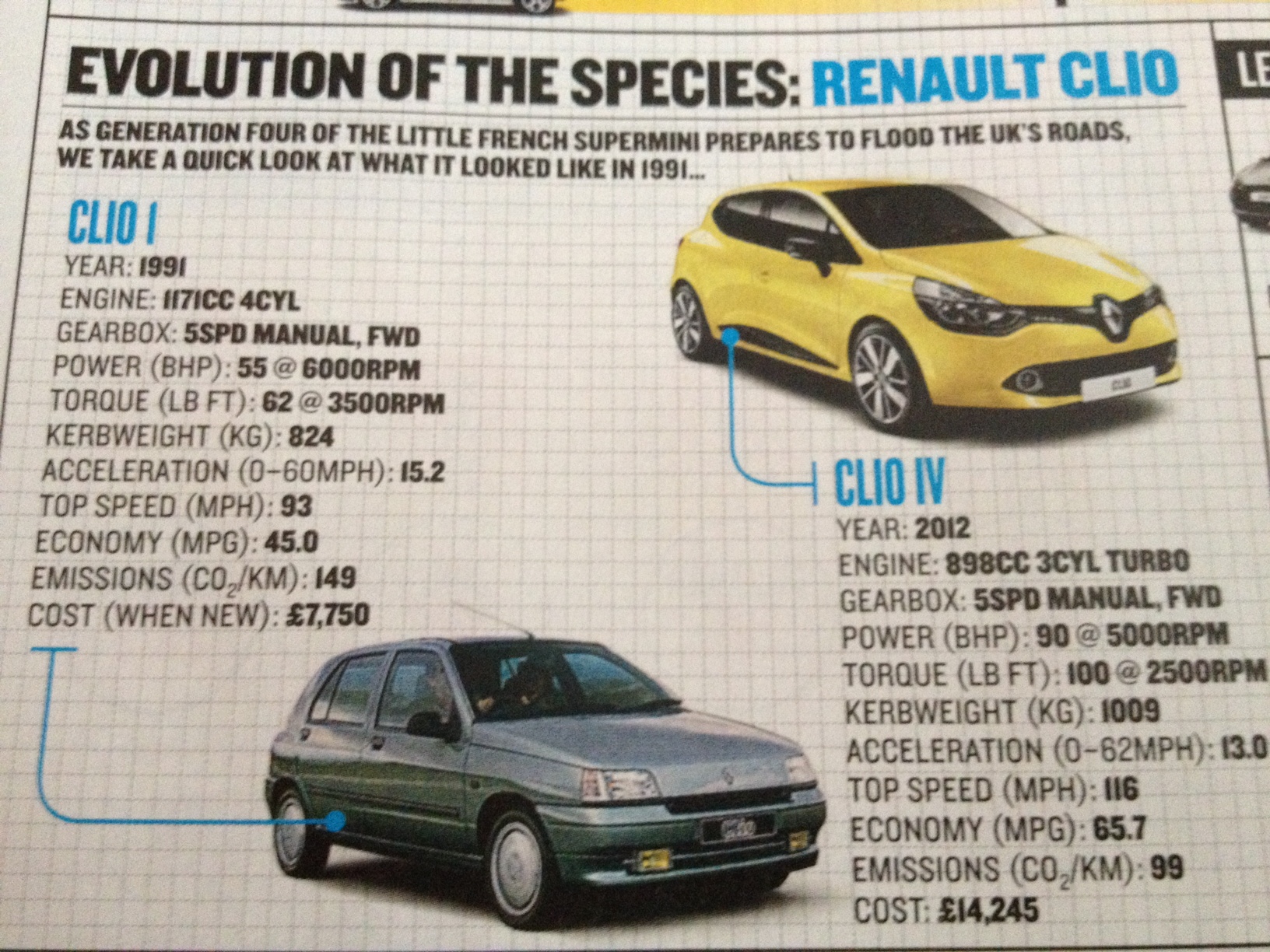 Evolution of the species. Example for illustration purpose only. Source: Topgear

At least on paper. We are growing increasingly accustomed to the reality that official consumption data is often far removed from reality – this doesn’t even make the news anymore. Part of this discrepancy comes from different use: we drive more in cities, where fuel consumption is higher, than the proportion of urban driving cited in tests. But this does not explain the entire difference. Recently we have also learned the reasons behind the remaining discrepancies.

As several studies have pointed out, car manufacturers employ a large variety of tricks to improve fuel economy (and CO2 emissions data) during testing. In fact, it seems that real consumption is, on average, almost 25% higher than official statistics claim, although this figure could be even greater (up to 50%) for certain car makes. Furthermore, these differences have actually increased lately: around a third of all consumption decrease over the past 10 years has only happened on paper.

The picture below shows how and where cars are “fine-tuned” to achieve better fuel economy results (and this list isn’t even exhaustive – see further details here and here). Some of these tricks are rather trivial, such as overinflating the tires (which would be dangerous in traffic), or taping indentations and protrusions on the car’s exterior to reduce aerodynamic drag. 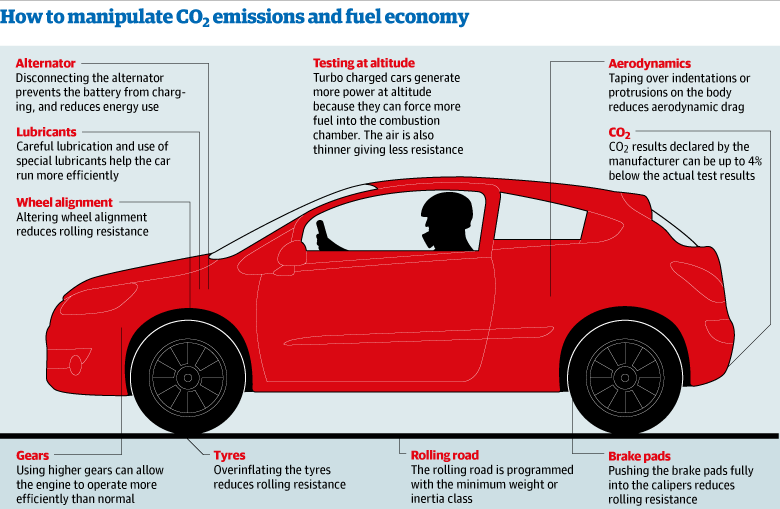 Tips and tricks. Source: The Guardian

However, some methods are rather sophisticated. Cars may be tested at high altitudes (because thinner air reduces resistance, and turbo-motor cars consume less in such cases), or they are fully charged so that battery recharging does not use up any energy. And some tricks are simply incomprehensible: according to the current standards, car manufacturers are allowed to report CO2 levels 4% below the actual measured results.

These tricks aren’t illegal, but there are certainly a lot of loopholes. And this affects more than just a few car makers (the example above could have been chosen at random).

If everyone would “cheat” by the same percentage, then potential buyers could still be able to rationally choose between different models. But the differences are far from uniform. For example, as autonavigátor explains, fuel economy figures are more skewed in the case of smaller cars. This may actually have to do with the fact that consumption is more important with regards to smaller models, and therefore cheating pays off more.

Time-comparisons (such as the example of Renault Clio cited at the beginning of this post) are similarly misleading. I was surprised to see the amazing “development” of testing over the past 10 years. The diagram below shows how much technological development accounts for this improvement, as well as the origin of further differences. 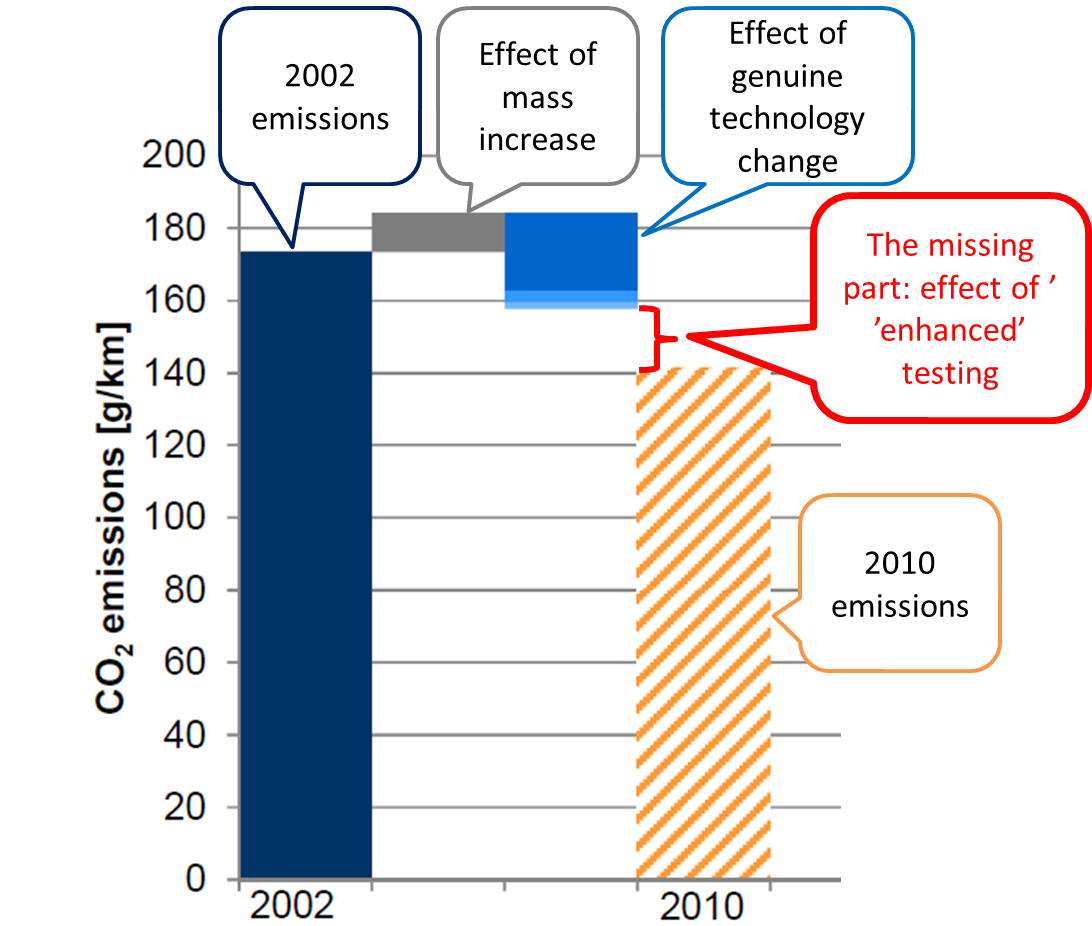 But if we start to really think about it, motivating factors have also changed, thus rewarding creativity. On the one hand, fuel prices have risen, and therefore consumption data has become more important in decisions on what model to buy. Also, the EU has prioritized decreasing cars’ CO2 emissions, and in many places car taxes are also dependent on emission levels. Consequently consumers also benefit from manufacturers reporting lower emission figures. (Similar abuses occur in the US too, but they may also carry a greater reputational risk if such manipulations come to light, and the danger of expensive law suits also looms heavily.)

Don’t worry: the European Commission already knows about the problem (in fact, one of the more detailed studies was actually prepared upon their request). It’s only a matter of years before they do something about it. The solution is actually quite trivial: let’s not trust car manufacturers and a few testing companies on their payroll to produce reliable results when it is in their interest to manipulate figures. (A similar example in this regard – from the field of finance – is the manipulation of Libor and other inter-bank interest rates.) Although we previously cited official EU car consumption databases in our own analyses, we will hereby end this practice.

Until then, we must place our faith in independent databases, with detailed fuel economy statistics for various models, where thousands of users can upload their own consumption data. The Environmental Protection Agency (EPA) in the US also runs such a site – and in this way manipulation may come to light faster. In Germany, ADAC conducts standard, and more realistic, tests on consumption, while Spritmonitor collects data from drivers (i.e. via smartphones).

According to ADAC, the new Clio consumes 5.2 l / 100 km in real traffic, roughly the equivalent of the 1991 model’s consumption on paper. Spritmonitor uses report higher levels (around 5.8-6.5 l) for the new Clio, while the 1991 type (yes, it still exists!) uses 6.5-8 l.This could come in handy once someone in Hungary decides to buy a new car again.