Elon Musk, the billionaire entrepreneur behind PayPal and Tesla, recently unveiled his plans for a new, superfast transport system, which generated a lot of hype in the media. But the plans are still somewhat vague. We show how passengers could look like while covering the distance between Budapest and Prague in a mere 30 minutes.

A cross between the Concorde and air hockey

Elon Musk (famous for inventing PayPal, the Tesla electric car as well as founding the Space-X space company) gave the name “Hyperloop” to his superfast rail plans that seem to be straight out of some science fiction movie. Passengers would travel in transport pods moving within steel tubes; the steel tubes, in turn, would be mounted on surface-level columns. With potential speeds of up to 1,200 kmph, air cushions would reduce the energy required for acceleration, and some of the energy could actually be recovered during braking.

According to Musk, the concept is “a cross between the Concorde, a railgun and an air hockey table”, and would be quicker, cheaper and safer than the high-speed trains planned to run between San Francisco and Los Angeles. It would be similar to a large pneumatic tube in practice. 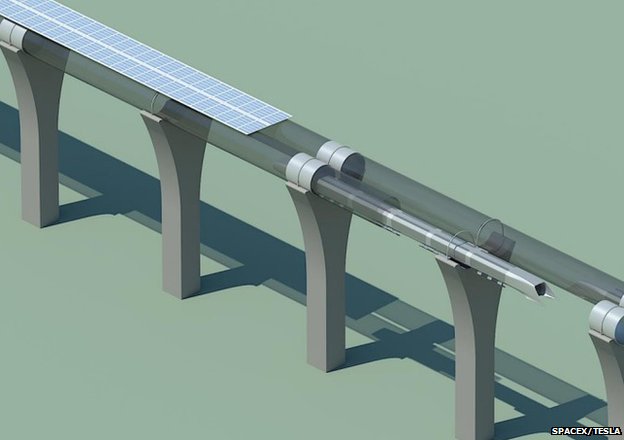 They would run in steel tubes. Source: bbc.com

“We wanted flying cars, instead we got 140 characters”

We basically like the concept; Musk has proven himself on several occasions (although many doubted him at the start, his company did in fact learn how to build spaceships), and his ambitions are certainly impressive. This is Musk’s answer to the complaints of Peter Thiel, PayPal’s co-founder, who reflected on the technological hopes of his childhood by claiming: “We wanted flying cars, instead we got 140 characters” (referring to the maximum length of a Tweet).

There’s still plenty to do

To be fair, the Hyperloop technology is still rather vague… It’s similar to someone writing a 57-page study on generating electricity through the fusion of hydrogen atoms. This idea has been around since the 1950s, we already have experimental reactors, but no one has yet been able to extract more energy from a system than that which originally existed (barring hydrogen bombs). So something that works on paper may not necessarily be feasible in real life…

It’s no coincidence that Elon Musk himself added he wouldn’t develop the project himself. If it would really cost just $6 billion on the distance between San Francisco and Los Angeles (as he claims), with a bit of an exaggeration, he could raise that much money in just a matter of days. (For comparison’s sake: the total value of shares of his similarly (over)hyped company, Tesla, now amounts to $12 billion.)

But practical problems abound. Just to mention one of them: as a means to reduce costs (the buying and expropriation of land), the planned rail link would follow the path of an existing motorway, the Interstate 5. Still, a sharp turn in the road that you can navigate well at 130 kmph may pose a much greater challenge at speeds of up to 1,200 kmph.

The route between Los Angeles and San Francisco is relatively straight. But if you wanted to introduce the technology on winding roads near densely populated areas, such as – dare to dream! – the one between Budapest and Prague, the result could end up being something similar to the video below.